Gemini VIII was the first mission where two spacecraft docked in space. It was also the first time astronauts were forced to solve a life-threatening emergency in space. Neil Armstrong and David Scott successfully worked through the emergency, returning safely to Earth. Both would go on to walk on the Moon during the Apollo program. The Armstrong Air & Space Museum wanted to enhance their exhibit, which features the original Gemini VIII space capsule, to tell the story of the mission. 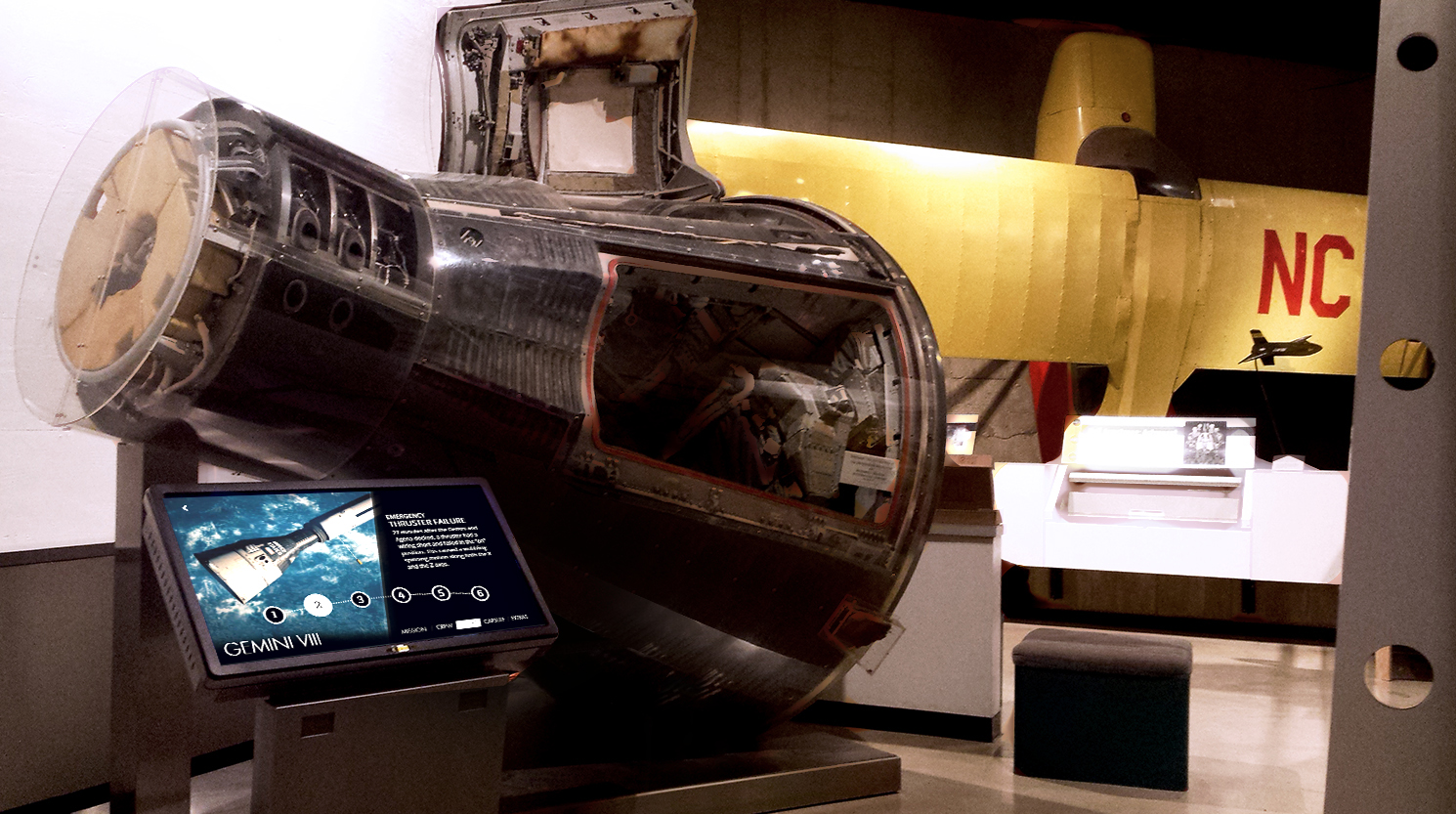 Since it opened in 1972, the Armstrong Air & Space Museum has been the home of the original Gemini VIII space capsule. The museum partnered with Illumen to bring the history of the capsule, the momentous docking, the potentially fatal emergency, and information on the crew and project Gemini to life. Illumen’s David Charney worked directly with the museum to learn about the mission, the common questions the museum’s many visitors would ask, and gathered imagery and videos available from the museum’s resources and NASA. The museum staff, including the curator and experience coordinator, are the authorities on Neil Armstrong and the Gemini VIII mission. They were crucial to the development and the success of this project.

We greatly enjoyed working with Illumen Group on the Gemini VIII kiosk project. With this being the museum’s first touchscreen kiosk for exhibits, Illumen provided invaluable guidance and insight into how to present content in that medium. From content research and development to kiosk design and installation, Dave and Tony worked closely with museum staff to ensure accuracy, even in the small details. The kiosk is a layered, dynamic learning tool that our visitors enjoy every day.

Illumen’s approach was to develop a kiosk next to the capsule that would showcase five major areas: Mission, Crew, Flight, Capsule, and Extras. The flight itself included the onboard emergency. Under the guidance of Illumen’s 3D Designer – Tony O’Dell, we created several animations that realistically demonstrate what the emergency looked like, which has always been difficult to explain.

It was also important to showcase the original images and videos taken during the mission. To accomplish this, we used minimal user design to allow the images and video to be as large as possible on screen.

The museum has many tours and instructor-led training (ILT) classes and events, so availability and scalability are important. This project was built to be reusable and compatible across many devices, so museum staff can use the kiosk itself or run the same project on their mobile devices.

Here are the features of the finished project we created:

This mission has an archive of imagery and videos that we used to visually tell the story of the crew, the liftoff, the flight in space, and reentry. Illumen took photos of the inside and outside of the capsule to provide additional capsule information and created 3D animations to help explain details that were difficult to visualize. Everything together creates a cohesive visual multimedia experience.

This project is versatile. Articulate Storyline was used to create an experience that works on many devices so it can be available on the kiosk and on a tablet during presentations and museum tours. The project is HTML5 based, which allows the same experience across most web browsers.

The emergency that took place has always been difficult for the museum to help visitors visualize. There is no video from space that depicts the details of what happened. Using 3D animation, Illumen developed realistic animations that clearly show the stages of the emergency.

The project runs 24 hours a day and 7 days a week, so it is important that visitors are prevented from interfering with the software, operating system, and hardware of the kiosk. Illumen worked with the museum to find a suitable touchscreen kiosk, and added software that provides security to the software and browser to minimize potential issues.

The Museum’s staff is elated with the accuracy and dependability of the project, and visitors gain a better understanding about a piece of space history. The kiosk is highly used and appreciated. Please reach out to Illumen for more information about this kiosk or how Illumen can help you with your project.

Take some time to check out the wonderful Armstrong Air & Space Museum in Wapakoneta, Ohio and discover the amazing life of the first man to walk on the Moon, Neil Armstrong. Their team is always excited to educate children and adults on Neil Armstrong, the historic journey to the Moon, and all things space related.

Schedule an intro and demo with Illumen today

We are always happy  to discuss the following with you: